🌕This article is about the failure analysis of ceramic capacitors, which may fail in different environments.

1.Influence of humidity on deterioration of electrical parameters

🌝When the temperature in the lost air is too high, the water film condenses on the surface of the capacitor shell, which can reduce the surface insulation resistance of the capacitor. In addition, for semi-dense structure capacitors, moisture can also penetrate into the capacitor medium, which reduces the insulation resistance and insulation ability of the capacitor medium. Therefore, the influence of high temperature and high humidity environment on the deterioration of capacitor parameters is extremely significant. The electrical properties of capacitors can be improved after drying and dehumidification, but the consequences of water molecule electrolysis cannot be eradicated. For example, under the high temperature conditions of capacitor operation, water molecules are electrolyzed into hydrogen ions (H+) and hydroxide radicals under the action of an electric field. ions (OH-), causing electrochemical corrosion of the roots. Even after drying and dehumidification, it is impossible to restore the leads.

🌖Most of the inorganic dielectric capacitors use silver electrodes. When the semi-sealed capacitors work under high temperature conditions, the water molecules that penetrate into the capacitors generate electrolysis. An oxidation reaction occurs at the anode, and silver ions combine with hydroxide ions to form silver hydroxide; at the cathode, a reduction reaction occurs, and silver hydroxide reacts with hydrogen ions to form silver and water. Due to the electrode reaction, the silver ions of the anode are continuously reduced to the cathode to form discontinuous metallic silver particles, which are connected by the water film and extend to the anode in a tree-like manner. The migration of silver ions not only occurs on the surface of the inorganic medium, but also diffuses into the interior of the inorganic medium, causing an increase in leakage current, and in severe cases, a complete short circuit between the two silver electrodes, resulting in capacitor breakdown.

🌘As the active area of the positive electrode decreases, the capacitance of the capacitor will decrease accordingly. The surface insulation resistance is reduced due to the presence of silver oxide semiconductors on the surface of the dielectric between the two electrodes of the inorganic dielectric capacitor. When the migration of silver ions is serious, a dendritic silver bridge is erected between the two electrodes, which greatly reduces the insulation resistance of the capacitor.

✨To sum up, the migration of silver ions will not only deteriorate the electrical properties of unsealed inorganic dielectric capacitors, but may also cause the dielectric breakdown field strength to decrease, and finally lead to capacitor breakdown.

🌈The conductive dendrites formed by migration can locally increase the leakage current, which can cause thermal breakdown and cause the capacitor to break or burn. Thermal breakdown occurs mostly in tubular or disc-shaped small porcelain dielectric appliances, because local heating is severe during breakdown, and thinner tube walls or smaller porcelain bodies are easy to burn or break.

☃️The electric field between the electrodes of the silver ion migration capacitor is seriously distorted, and the surface of the ceramic dielectric is condensed with a water film in a high-humidity environment, which causes the corona discharge voltage on the edge surface of the capacitor to drop significantly, and the phenomenon of flying between the surface electrodes occurs under working conditions. In severe cases, it will lead to the breakdown of the flying solitary between the electrodes on the surface of the capacitor. Surface breakdown is related to factors such as capacitance structure, inter-electrode distance, load voltage, hydrophobicity and moisture permeability of the protective layer. The main reason for the breakdown of the flying solitary between the poles on the edge surface is that the amount of edge left in the dielectric is small. When working in a humid environment, the migration of silver ions and the formation of surface water film make the insulation resistance of the edge surface of the capacitor drop significantly, causing corona discharge and eventually lead to shock. Put on. Especially in high humidity environments. Since it takes a period of time for the generation and development of silver ion migration, in the initial stage of the withstand voltage test, the main failure mode is dielectric breakdown, until after 500h of the test, the main failure mode transitions to the edge-surface inter-pole flying solitary breakdown.

🍧Another example is the monolithic low-frequency ceramic dielectric capacitor with silver as the electrode. Since the silver electrode and material are sintered at 900 ℃ for one time, the dense ceramic dielectric cannot be obtained, and there is a large porosity. The flux barium oxide will penetrate into the interior of the porcelain body, and rely on the good infiltration “mutual fusion” ability between barium oxide and silver at high temperature, so that thermal diffusion occurs inside the electrode and the medium, which is the macroscopic “porcelain absorption”. silver” phenomenon. After the silver enters the porcelain body along with the barium oxide, the effective thickness of the medium is greatly reduced, resulting in a reduction in the insulation resistance and reliability of the product. In order to improve the reliability of monolithic capacitors, silver palladium electrodes are used instead of electrodes that usually contain barium oxide, and 1% of 5# glass frit is added to the material formula. It eliminates the thermal diffusion of the metal electrode to the ceramic dielectric layer during the first sintering at high temperature, which can promote the sintering and densification of the ceramic material, so that the performance and reliability of the product are greatly improved. Compared with the original process and dielectric materials, the capacitor’s The reliability is improved by 1 to 2 orders of magnitude.

🤹Figure 3.47 shows a schematic diagram of a laminated ceramic capacitor breaking after being subjected to mechanical force. 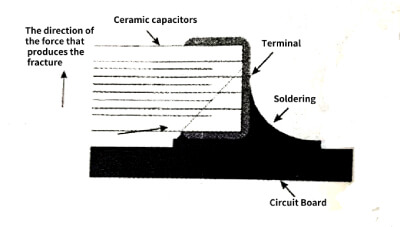 7. Electrode terminals of laminated ceramic capacitors are melted and showered